The Law and Happiness in Bhutan

A new law school in the Land of the Thunder Dragon

Among the rugged mountains and the swiftly flowing rivers of Bhutan, new legal institutions are taking root. Soon this small country—with just over 750,000 inhabitants—will open its first law school.

In recent years, the Himalayan nation, wedged between China and Tibet to the north and India to the south, has undergone significant political and cultural transformations. In 2006, the nation’s fourth king, Jigme Singye Wangchuck, announced that he would step down in favor of his son and he set in motion the drafting of a new constitution to replace an absolute monarchy with a constitutional one. In 2008, a new constitution was ratified. Now, nine years later, the Jigme Singye Wangchuck School of Law will open its doors to its first class in July.

Envisioned by the current king to honor his father and his father’s guiding development philosophy for Bhutan, which he called Gross National Happiness, or GNH, Jigme Singye Wang­chuck School of Law will operate under the motto “Justice, Service, Wisdom.”

GNH may sound a bit hedonistic to some, but its origins are Buddhist. It makes collective happiness the goal of government and emphasizes harmony with nature and traditional values. Where the United States has its “life, liberty and the pursuit of happiness,” Bhutan has the four pillars of GNH—economic self-reliance, environmental conservation, cultural preservation and promotion, and good governance.

Another Harvard Law School graduate, Stephan Sonnenberg ’06, has also been working to realize that goal. A former clinical faculty member at Harvard Law School, he was teaching at Stanford when he stumbled upon a notice that a school in Bhutan was looking for someone to start a clinical program. Bhutan had been on Sonnenberg’s bucket list for years, albeit mostly for the country’s mountains and renowned beauty. He joked with his wife about applying for the position, and she called his bluff. The couple and their two children have now been living in Bhutan since July 2015, and he has been helping to design the school’s curriculum and will teach alongside 10 other faculty members.

Together, Princess Wangchuck, with Sonnenberg and the rest of the faculty, are hoping to create lawyers who will simultaneously uphold the Bhutanese constitution, legal institutions, and laws, and also serve the people, all without disrupting approaches for settling disputes that have worked effectively for generations. For example, there is a tradition in civil disputes of a barmi—a community elder, a wise uncle, a friend—an adviser in your corner. The idea is not to replace this cultural tradition with a new class of lawyers, says Sonnenberg; rather the hope is that lawyers will complement it.

In July, Bhutan’s first law school will open its doors to its inaugural class. In 1817, the first professional school of law at a U.S. university got its start in Cambridge, Massachusetts. We compare a few facts about these two beginnings, across two centuries and nearly 7,500 miles. 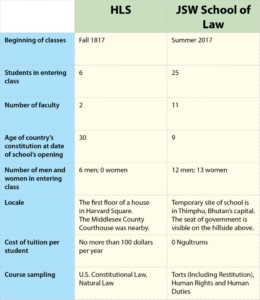 Previously, lawyers were typically educated abroad. They returned to spend one year training in Bhutanese law and in Dzongkha, which is the official language of the courts and government offices across Bhutan. Most lawyers went on to serve in government. Now Princess Wangchuck, Sonnenberg and colleagues hope to educate the next generation of lawyers in a very Bhutanese kind of law school.

“How do you build a legal culture that takes the best of what is commonly taught in law schools around the world, in terms of rule of law and justice, fairness, human rights, and also retain the best of a very nonlitigious society?” asks Sonnenberg, whose work has focused on conflict analysis and resolution, human rights, and humanitarian and development assistance.

A Western definition of human rights doesn’t fully encompass the sense of justice people want in Bhutan, says Sonnenberg. The society is based on Buddhist principles, and the crime rate is exceptionally low. “It’s almost like it’s an insult to karma to lock your car door,” he says.

The new school is unlike most in the United States in a variety of ways. JSW Law students will be undergraduates and gain a liberal arts education at the same time as they are being trained in advocacy. In July, rather than launching into contracts or torts, they will start with a “transitions” course designed to introduce them to the idea of a classroom where students are encouraged to ask questions, challenge and engage.

“If we want to do anything like the Socratic method, we need to make sure that the students realize that pushing back against a professor is not a sign of disrespect,” says Sonnenberg.

In the fall, students will study tort law (including restitution), economics, philosophy, legal composition and rhetoric. Students will also take a class called Human Rights and Human Duties; Sonnenberg thinks of it as a human dignity class and sees it as central to the curriculum.

“It’s really positing human dignity as the core of the rule of law, or the core of why you would even think about a legal system, or have a legal system,” he says. “It’s sort of a cross between philosophy and law, and we’re framing it as a broad course that can situate students as ethical lawyers.”

Also required are a mediation/arbitration class and a negotiation class. Experiential learning, including moot court; a 12-month law clinic where students can choose to focus on alternative dispute resolution and conflict management, human dignity, or small-business entrepreneurialism; and an externship will consume 20 percent of the students’ total time, which is unique among law schools in the region. There’s a hope among the faculty and founders of the school that there will be a strong public interest orientation among the lawyers it produces.

Last year, officials from the school traveled all over Bhutan visiting secondary schools to recruit students. “I had phobias of us attracting only one kind of student,” says Sonnenberg of the applicants, “and it’s totally the opposite.” In fact, the 25 students accepted represent 15 of the nation’s 20 dzongkhags, or districts, and most of the students come from Bhutan’s far east, a three-day drive from the capital city and the school’s temporary home, Thimphu. (A permanent campus is being built in Paro, to the west.) The class is almost evenly split across gender lines. Twenty-eight percent are the children of farmers, and only one or two students have a lawyer in the family.

“I met a lot of them during interviews,” says Sonnenberg. “They were sharp and critical and engaged with us. It’s going to be a unique classroom.”

Wangchuck sees what is taught in the school’s classrooms as important not just to its students, but also to the wider world: “JSW School of Law will produce a generation of responsible and able lawyers who will contribute to enabling a just and content society. The Bhutanese value of harmony will be reinforced and exercised through alternative dispute resolution. Our value of coexistence will be propounded through sustainable development law and respect for nature through our environmental law programs. We will develop these areas and take forth lessons and good practices not only for Bhutan, but also for all who could benefit.”

“Law and happiness, we believe, are not opposed to each other,” she says.