When Voting Is a Risky Choice

The November 2020 general election was shaping up to be one of the most highly anticipated, nerve-wracking and deeply contested elections in American history, with most onlookers expecting record-breaking voter turnout. Then a pandemic hit.

On April 7, Wisconsin became a cautionary tale for elections in the time of the coronavirus. Concerns over virus exposure caused nearly 7,000 poll workers to step down from their posts. As a result, Wisconsin’s largest city, Milwaukee, reduced its number of voting locations from 180 to just five. Crowds waited in lines for hours to vote in person. Thousands of voters who requested absentee ballots did not receive them in time. And on top of it all, the U.S. Supreme Court added a final complication on the eve of the election by overturning a federal court order that had given voters an extra week to submit ballots by mail. “People should really look at Wisconsin as what should not happen,” says Jessica Amunson ʼ04, a partner at Jenner & Block who chairs the firmʼs election law and redistricting practice.

In Wisconsinʼs defense, preparing for a safe and reliable election in the face of a global pandemic is hard to do on the fly. “I feel bad for Wisconsin being the first to do this,” says HLS Lecturer Ruth Greenwood, who runs the schoolʼs Voting Rights Litigation and Advocacy Clinic. “But having seen that kind of disaster in Wisconsin on Election Day, I would hope that would mean that places have realized they need to get ready a lot earlier than just before the election.”

The long road to November 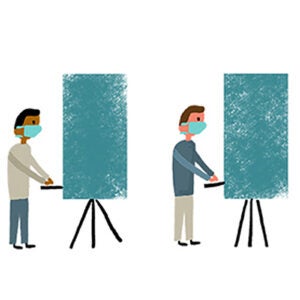 “The overriding norm is that the vast majority of people vote in person on Election Day. In a time of pandemic, thatʼs life-threatening.”

Even in normal times, “the election administrator’s prayer is, ʻDear Lord, let this election not be close,ʼ” says Loyola Law School Professor Justin Levitt ʼ02, who worked on voting rights in the U.S. Department of Justice’s Civil Rights Division. Thatʼs because American elections have long suffered from minimal funding and significant infrastructure issues that can threaten election results, ranging from outdated vote tabulating machines to inconsistent practices for issuing and counting ballots. If a candidate wins in a landslide, however, crisis is averted. “Elections are infrastructure, and like any other infrastructure issue, you only notice them when they break,” Levitt says.

The pandemic is threatening the electoral infrastructure in states unprepared to deal with the challenges posed by a highly infectious and sometimes fatal disease. In most states, says Amunson, “the overriding norm is that the vast majority of people vote in person on Election Day. In a time of pandemic, thatʼs life-threatening.”

Postponing the election, an option in the spring primary season, will not be available in November, as presidential and congressional election dates are set by statute. Instead, HLS Professor Nicholas Stephanopoulos, whose research focuses on elections and voting rights, expects that many states will try to transition to mail-in voting to the extent allowed by each stateʼs laws. Those who fail to transition, he says, will likely experience lower voter turnout, just as occurred in the 1918 midterm elections during a flu pandemic.

Even long before Election Day, “there’s a lot of other democratic participation that needs to happen, and all of those really important democratic rights are also being impaired by the pandemic,” Stephanopoulos says. Voter registration drives, often conducted in person, must now take place online—hampering would-be voters who may, for instance, be unable to download, print, and mail in required forms. And for issues or candidates to appear on a ballot, most states require a certain number of “wet” signatures—meaning written in ink rather than electronically—to be gathered. 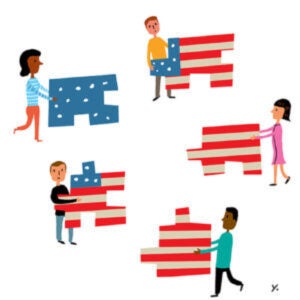 “There’s a lot of other democratic participation that needs to happen, even before Election Day, and all of those really important democratic rights are also being impaired by the pandemic.”

But now, Greenwood says, “no one is going to let a stranger come up to them with a pen and paper.” Litigation spurred Massachusetts to allow electronic signatures for 2020 ballot initiatives. States that require in-person witnesses for voters who sign mail-in ballots face similar litigation.

What to expect on November 3

Making elections safer means lowering peopleʼs exposure to each other. “Where thereʼs still real risk to people to leaving their homes or exposing themselves, vote-by-mail is really the only option,” Amunson says.

But remote voting creates challenges both practical and political, and some states will weather the storm better than others. The five states that currently use “universal” voting by mail, wherein all registered voters receive ballots by mail—Colorado, Hawaii, Utah, Oregon and Washington—will likely fare best. The remaining states—which either let voters cast absentee ballots only if they present a valid excuse (16 states) or for any reason at all (29 states and the District of Columbia)—will all have to contend with skyrocketing demand. In Wisconsin, only 10% of ballots are normally cast remotely. In April, that number jumped to 80%, causing election clerks to run out of envelopes and a spike in mailing costs for local authorities.

Then there are the politics. Some states that require a valid excuse before issuing absentee ballots, including Massachusetts and New Hampshire, have already stated that the coronavirus will qualify. But others, such as Texas, are arguing in court that the pandemic does not justify staying at home to vote.

The reason, says Stephanopoulos, is largely partisan. “There’s a conventional wisdom that higher turnout benefits Democrats,” he explains. According to Stephanopoulos, that assumption has little empirical support and appears especially questionable now, as the virus threatens both Democratic and Republican bases. “But everyone is operating under the assumption that the old rules still apply,” he says. 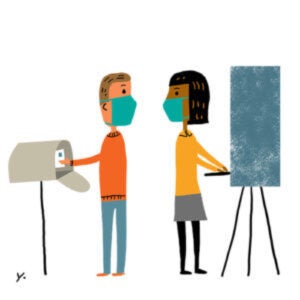 Even those who agree that voting by mail is safer in a pandemic recognize that it has its downsides. Greenwood notes that one of her students, who is blind, requires in-person ADA equipment to have a secret ballot. The same is true for voters who require language assistance. Voters currently quarantined with family members or spouses of different political persuasions may face pressure or coercion. Native American communities could be disenfranchised, as many lack USPS-recognized mailing addresses, and voters who move may never receive their ballots. Voters whose current signatures do not match the signatures they submitted when they registered to vote may not have their votes counted. “There are great things about vote-by-mail, but we canʼt have only vote-by-mail,” Greenwood says.

Voting by mail can also increase uncertainty. In states that do not count mailed-in ballots until after Election Day, an increase in remote voting could leave the results of some elections unknown for days or weeks. 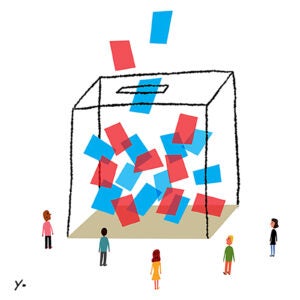 “One of our goals is to ensure that both the winners and losers of every election on the ballot this fall, and their supporters, whether theyʼre happy or not about the results, have faith that theyʼre the accurate results.”

Wisconsin highlighted what can go wrong in an election stressed by a pandemic. But its neighbor across the lake, Michigan, just may be an example other states can look to for how to get it right.

On March 10, 2020, Michigan held its presidential primary. One hour after the polls closed, Michigan Secretary of State Jocelyn Benson ʼ04 received a call from the governorʼs office: The state had identified its first two coronavirus cases. Michiganʼs next local elections, scheduled for May 5, were less than two months away.

Bensonʼs office—already operating in overdrive to implement a series of voting changes, including vote-by-mail, adopted through a 2018 ballot measure—immediately sprang into action. She was keenly aware that “every decision that we make right now with regards to our democracy creates a precedent for how our democracy is handled during a pandemic, not just for November but for years to come.” Benson reached out to experts and academics nationwide to develop a plan to reduce in-person voting without sacrificing voter turnout.

First, her office worked with local county officials to decide which elections could be postponed to August and which could not. Michigan encouraged voters to adopt remote voting in May by mailing applications to registered voters with prepaid postage—costing the state nearly $600,000. Each jurisdiction maintained at least one physical polling place for anyone who needed or wanted to vote in person, and the locations were stocked with masks, gloves, hand sanitizer, and other gear to limit virus transmission. The state also recruited hundreds of volunteer poll workers to replace any who felt unsafe working on Election Day. The result was staggering: Turnout doubled, but polling locations saw no lines, as the vast majority of voters voted by mail.

Hope for a reliable election 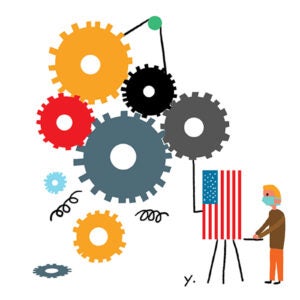 Whether Election Day looks more like April 7 in Wisconsin or May 5 in Michigan, some voters will be left wondering, Were the results accurate? Misinformation, coupled with genuine strains on the electoral system exacerbated by a pandemic, will inevitably sow distrust in pockets of the electorate.

Benson says, “One of our goals is to ensure that both the winners and losers of every election on the ballot this fall, and their supporters, whether theyʼre happy or not about the results, have faith that theyʼre the accurate results.” But she admits that in these times, that can be a lofty goal.

To remain optimistic about the November elections, Levitt says, it helps to take a long view. “Despite the struggles and despite the problems, we are getting better at this,” he explains. In August, the nation will celebrate the centennial of the 19th Amendment, which guaranteed women the right to vote. Compared with 100 or even 30 years ago, Levitt adds, “more people are involved, more people are eligible, more people are voting, and the system works more smoothly.” He hopes that will remain true in November. And that the elections will not be close.