The state of capital punishment

The Harvard Law School Library hosted a series of talks on the death penalty in conjunction with the library’s exhibit “Visualizing Capital Punishment: Spectacle, Shame and Sympathy” 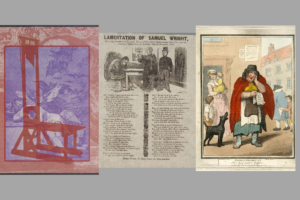 A new library exhibit explores the power of images to change minds about the death penalty.

Sponsored by the Harvard Law School Library, the events are being held in conjunction with the library’s newest exhibit “Visualizing Capital Punishment: Spectacle, Shame, and Sympathy.” The exhibit, drawing from material in the library’s Historical & Special Collections, explores the power of visual imagery to change minds about the death penalty.

Over the centuries there have been many inventive and sometimes torturous modes of capital punishment, including burning at the stake, the guillotine, and hanging, said Steiker in her Oct. 12 remarks, which provided historical context for the death penalty as well as an overview of the current state of the death penalty in the United States.

It’s only used “with any great frequency” in only a handful of the states that do authorize the death penalty, she said.

The current trajectory of the death penalty in the United States maps onto the trajectory of the world. “In the last half century the world has seen a tremendous decline in capital punishment, both in its authorization and its use,” she said.

“What’s really great about this exhibit,” said Steiker, is it “gives us some insight into what has brought us to where we are today, and what has led to the destabilization and the diminution of the practice of capital punishment here and in other similar places in recent years.”

A second event in the  series, “Death Penalty Defense Work,” held  in early November, featured Steiker in conversation with recent HLS graduates working in the area of death penalty defense.

The Library will sponsor three more related events in the spring:

Also in March, Carol Steiker will host a fireside chat with several scholars on the state of capital punishment in the U.S. after Furman v. Georgia.

In April, the library will host an ideas salon, featuring current and former Capital Punishment Clinic students discussing their work

The  “Visualizing Capital Punishment” exhibit features a range of materials from the library’s collection, including English execution broadsides; original political cartoons from a collection recently donated by Harvey Silverglate (HLS 1967); and a modern art portfolio, Contra la Pena de Muerte, by Puerto Rican artist Antonio Martorell which was recently acquired by the library.

The exhibit was curated by KB Beck from the Library’s Historical & Special Collections. The exhibit is on view in the Caspersen Room, Langdell Hall, weekdays from 9 to 5 through June 2023. Access to Harvard Law School buildings is currently limited to Harvard ID holders. The exhibit is also viewable online.