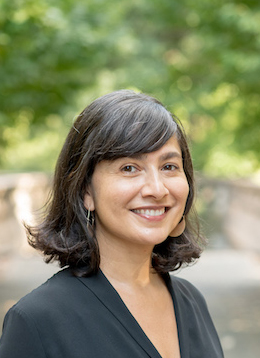 Premal Dharia is the Executive Director of the Institute to End Mass Incarceration at Harvard Law School. She has spent the last twenty years dedicated to challenging injustice in the criminal system. Ms. Dharia spent nearly 15 years as a public defender in three different places: the Public Defender Service in Washington, D.C., the Office of the Federal Public Defender in Baltimore, Maryland, and the military commission at Guantanamo Bay, Cuba. She has tried dozens of cases and supervised lawyers at various levels of practice. In 2014, Ms. Dharia was selected for a three-month fellowship to help build out and train three new public defender offices in Palestine. After years in the field of public defense, she brought her years of direct service and substantial expertise to systemic work at Civil Rights Corps, where she was the Director of Litigation.

In 2019, Ms. Dharia, started building a new organization to incorporate public defender advocacy into the broader push for systemic change to the criminal legal system. She was a Criminal Justice Fellow at the Reflective Democracy Campaign, a project of the Women Donors Network, which supported the launch of that organization, the Defender Impact Initiative (DII), and Dharia’s investigation into the intersection of reflective democracy and the criminal system. Through DII, Ms. Dharia worked to reimagine the role of public defenders as systemic change agents, engaging community organizers, advocates and attorneys in the process.

Ms. Dharia has spoken and written widely on systemic challenges in the criminal system, racial and carceral injustice, and the need for radical change. She is regularly on the faculty of Harvard Law School’s Trial Advocacy Workshop and the Bronx Defenders’ Defenders Academy and often speaks about litigation, advocacy and strategic approaches to change to national and local organizations, public defender offices, universities and law schools. She has written about these issues in such publications as The Washington Post, Slate, and Salon, and been interviewed as an expert for radio, podcasts, and in a variety of national and regional publications. She serves on the Boards of the Free Minds Book Club & Writing Workshop and the Second Look Project. Ms. Dharia graduated from Brown University with a degree in History and African-American Studies, with a focus on comparative post-colonial studies, and from the University of Pennsylvania Law School.