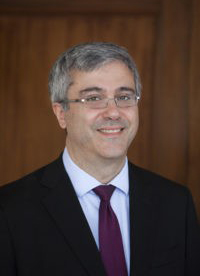 Thomas A. Saenz returned to the Mexican American Legal Defense and Educational Fund (MALDEF) in August 2009 as President and General Counsel. Prior, as Counsel to Los Angeles Mayor Antonio Villaraigosa, Saenz honed his leadership skills by serving on the four-person executive team to the mayor, where his legal and policy advice proved invaluable. During his four-year tenure with the City of Los Angeles, Saenz helped to lead the legislative effort to change the governance of Los Angeles Unified School District (LAUSD), the effect of which has been to take the City a step closer to securing a quality education for all students in Los Angeles. Saenz also served as the lead liaison on labor negotiations, with a personal goal of addressing serious financial challenges in partnership with the city’s workers.

Saenz had previously practiced civil rights litigation at MALDEF for 12 years. During that time, he successfully challenged California’s unconstitutional Proposition 187 and led numerous civil rights cases in the areas of immigrants’ rights, education, employment, and voting rights. Saenz achieved several victories against ordinances unlawfully restricting the rights of day laborers, served as lead counsel in the 2001 challenge to California’s congressional redistricting, and initiated the employment discrimination lawsuit resulting in a $50 million settlement with Abercrombie and Fitch. Saenz was also the lead drafter of the Amicus brief on behalf of Latino organizations supporting affirmative action in the Supreme Court case, Grutter v. Bollinger.

Saenz has been recognized on numerous occasions for his work. He was selected as one of Hispanic Business Magazine’s “100 Most Influential Hispanics” in October 2009. In 2007, Saenz received the Peace and Justice Award from Instituto de Educacion Popular del Sur de California; the Latino Law Students Association of Yale Law School Public Service Award in 2007; the Hispanic National Bar Association Ohtli Award in 2006; and the Mexican American Bar Foundation Professional Achievement Award in 2006.

His board service includes the Los Angeles County Board of Education, Alliance for Children’s Rights, Encompass, the Impact Fund and the National Hispanic Leadership Agenda. Saenz was born and raised in Southern California. He graduated summa cum laude from Yale University and received his law degree from Yale Law School with honors. He later served as a law clerk to the Honorable Harry L. Hupp of the U.S. District Court for the Central District of California and to the Honorable Stephen Reinhardt of the U.S. Court of Appeals for the Ninth Circuit. For eight years, Saenz taught Civil Rights Litigation as an adjunct lecturer at the University of Southern California (USC) Law School and has been widely published.